The FASD community is grateful that Kathleen K. Sulik, Ph.D. is a scientist who studies birth defects.

Her discipline is called teratology or developmental toxicology. Much of her research has involved studying the various types of birth defects that result from exposure of an embryo to alcohol at very specific times during development. 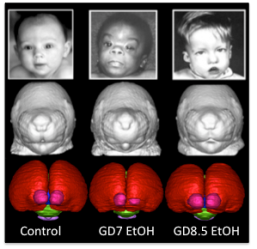 Dr. Sulik designed experiments to demonstrate that alcohol can cause major birth defects and the brain damage as early as the first three weeks of fetal development.

One of the major findings from her laboratory’s studies is that alcohol can cause permanent brain damage if exposure occurs at very early stages of embryonic development — stages that occur prior to the time that most women would even realize that they are pregnant.

Dr. Sulik began her career with plans of becoming a medical illustrator, but shifted her dream in college from art into biology. Her Ph.D. is in Anatomy and the FASD community is grateful. Her mentors for her dissertation research were clinical geneticists and she gained knowledge regardingt human birth defects. After completing her degree, she went to the University of North Carolina in Chapel Hill as a postdoctoral fellow. During her fellowship she began to use scanning electron microscopy to examine early mouse embryos. This technique provides 3-D like views and the opportunity to readily visualize the complex structural changes that occur during development.

A large dose of alcohol given to a pregnant mouse produced severe abnormalities in the developing fetus (bottom), according to doctors at the University of North Carolina studying effects of alcohol in early pregnancy. Compared with a normal fetus (top), the one exposed to alcohol suffered eye damage, a stunted brain, and facial deformities similar to human babies with FAS, particularly those affected during the first trimester, when bones and organs are forming. Blood-alcohol levels reached during the experiment approximate those that could occur in a woman of average size if she drank a quart of vodka within a 24-hour period.

For more information of her work or to review a collection of images assembled as an embryology tutorial that is available at www.med.unc.edu/embryo_images. Images such as these have proven invaluable for the teaching she has enjoyed during her career as Professor of Cell and Developmental Biology Member, Bowles Center for Alcohol Studies University of North Carolina School of Medicine. Published and co-published by Kathy.

Throughout Kathy’s career her research continued to employ techniques with significant visual component, including high-resolution magnetic resonance imaging (MRI). MRI allows appreciation of a spectrum of defects that are present in fetal mice whose mothers had been given alcohol.

Dr. Sulik’s work was critical in proving that alcohol is a teratogen.

Dr. Sulik and Dr. Susan Rich co-produced the documentary, funded by the CDC, “Dispelling Myths about Alcohol Related Birth Defects”. Dr. Rich co-authored the action paper that persuaded the American Psychiatric Association to include ND-PAE in the DSM-IV TR and in the current edition DSM-5 it is more frequently referenced by medical professionals.

After her seminal work that definitively demonstrated that alcohol is the causative factor in FAS, she and her lab went on to explore and define the stage-dependent effects of early gestational alcohol exposure on the face and brain in numerous different ways throughout her career. She explored and discovered numerous mechanisms of alcohol’s effects on the embryo, as well as describing several genetic factors that can modify susceptibility to developmental alcohol exposure. She did not restrict her research to the face and brain; her lab described in intricate detail the effects of developmental alcohol exposure on many different organs, including the heart, ears, kidneys, and limbs.

In addition to her research, and in conjunction with NIAAA and the National Organization on Fetal Alcohol Syndrome (NOFAS), Kathy developed several FASD prevention curricula that are still in use today. Finally, as part of her drive to eradicate FAS and FASD, Kathy labored tirelessly with public policy makers to change how FASD is viewed by the public, how FASD is identified in affected individuals, and how FASD is studied by researchers. While no article could fully cover Kathy’s contributions to FASD research and prevention, or her other contributions to embryology and teratology, this review will attempt to illustrate some of the highlights of Kathy’s remarkable career.

2 thoughts on “Who proved alcohol is a teratagen?”